by Lary
with 6 comments
AdaptingDaily
0

Picking up from where we left off in part 1,  we have some interesting topics for the day. They may seem trivial to some, but are more important than you might think. These topics include: transit and traffic systems, the Swedish grocery store, and lastly in home appliances. Everything is designed around efficiency, this shows whether you’re at home or navigating your way through Swedish traffic. Here’s an example… of course we have been exploring Malmö and its surrounding areas and we noticed something, we have yet to see a single traffic light. The reason for this is because roundabouts are drastically more efficient. Overall, it seems the Swedes have planned ahead to make their country as user friendly as possible.
You might not think about it, but over the course of our lives how much time do you think we waste sitting in traffic, at a red light or some other transit system deficiency? Time is one of the most valuable things as we can never get it back once spent. On that note, here’s are some interesting facts: “Roundabouts reduced injury crashes by 75 percent at intersections where stop signs or signals were previously used for traffic control, according to a study by the Insurance Institute for Highway Safety (IIHS).”  Additional studies by the IIHS of intersections in three states, including Washington, found that roundabouts contributed to an 89 percent reduction in delays and 56 percent reduction in vehicle stops. Congrats, you have more safely and efficiently navigated through traffic and just arrived at the grocery store.

One of the first things you notice as you walk in and go to grab a shopping cart is that all four of the cart wheels rotate 360 degrees. This might seem silly to Europeans that I bring this up, but is relatively fascinating for an American foreigner. The shopping baskets also have miniature 360 wheels and the basket has a handle for you to hold on to while the basket effortlessly glides around on the floor. I noticed as we walked through the store, people were able to more easily and effectively move their shopping carts/baskets. The carts also have these neat little electronic hand held scanners, they allow you to quickly lookup the price of items and then you can “add it to cart”. At the end of your shopping trip, you simply check in the scanner and pay for what you’ve collected. Genius!  Finally, you arrive at the checkout – you attempt to converse with the cashier in your broken Swedish but fail, as they quickly switch to English. We also noticed the conveyor belts were much narrower, which makes sense if you think about it. The casher can only scan one item at a time, so why pile up 5-10 items side by side only to make a huge mess of falling over groceries. Lastly, they have a divider that the cashier controls for after the items are scanned. This allows two people to be packing their groceries simultaneously, which makes the process faster. We have yet to use the electronic hand held scanner but we are working ourselves up to that. 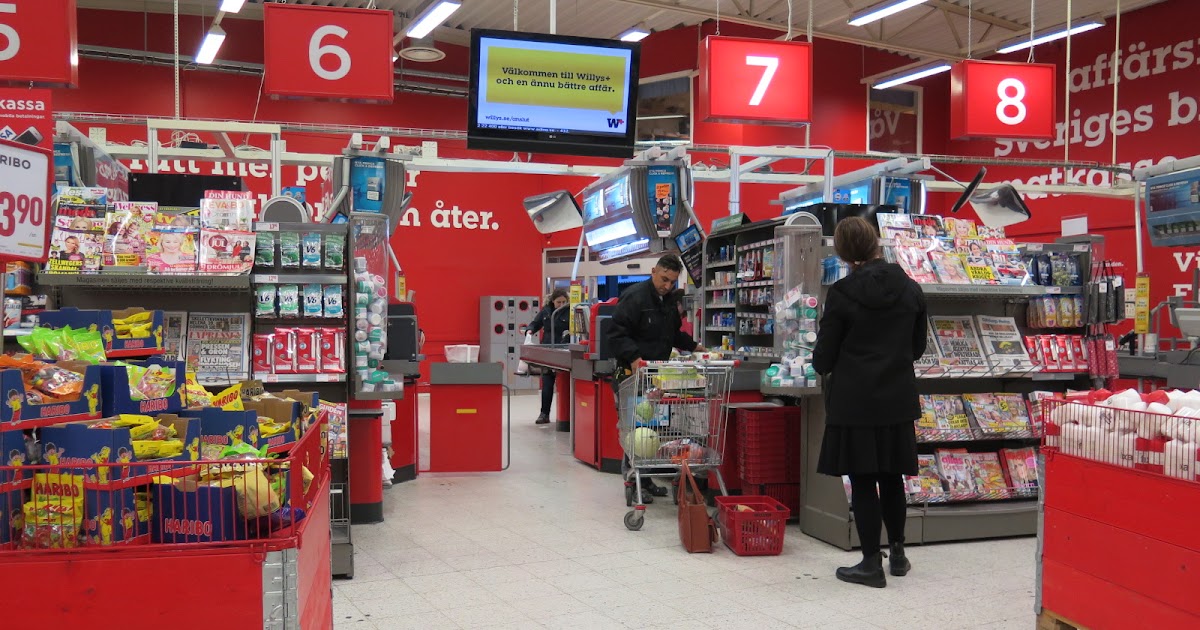 Speaking of electronics, Swedish house hold appliances! It seems almost all devices here have some energy savings efficiency thinking behind them. Appliances such as the washing machine, dryer, refrigerator, oven and stove top to name a few. All of them have some form of usage reminder, meaning if you leave open the refrigerator it will beep at you, same for the washing machine when it finishes a load. Safety precautions also seem to be much more relevant here, the stove tops are induction which typically are a bit safer. The oven has a little latch that requires both hands in order to open it. All in all, I have noticed so many things here in Sweden, it’s a night and day difference, old vs new, slow vs smart, it pleases my inner engineer. It’s a pleasure to observe and inspect my surroundings, I truly appreciate how much effort goes into design and functionality here in Sweden.

I plan on writing part 3 to this series – so stick around!

Drop a comment below on which efficient subject you found most interesting.

Born and raised computer nerd, cryptocurrency enthusiast. Decided to break out of the box and take control, now living in and exploring Sweden, writing about my life :).

Shopping Basket
%d bloggers like this:
We use cookies to ensure that we give you the best experience on our website. If you continue to use this site we will assume that you are happy with it.Ok